Kayaking and Canoeing on the Roanoke River, NC 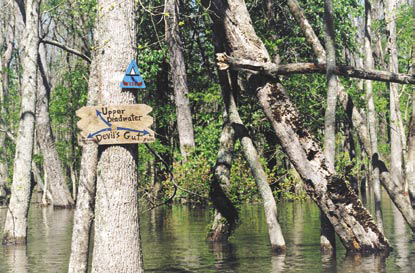 Story and photos by Adam Bonner

Ever since I read the article in one of my many outdoor magazines, I have wanted to visit the floating platforms on the Roanoke River.

Lined with goliath grandfather oaks and moss that tempts to drink the water, the Roanoke River in North Carolina slowly passes by houses and into the time of the dinosaurs. Although the water is dark, the view from a kayak at sunset is like looking into a mirror. In the distance a barred owl asks simply, “Who?”

On my latest adventure, I traveled along with Southern Adventures on their expedition north. Even though the drive is a bit more than most college students would want to put out for gas, it is still worth the seven hours (that’s with a stop for dinner). Unfortunately for many of the people along the river, recent rains had brought the river to the point of near flooding. Most of the available campground was underwater, but the group from Southern Adventures pitched the tents in the dark and
prepared for the next day.

When the sun rose, so did the spirits. What had seemed to be a rain fest turned out to be the start to a beautiful day. Anxiously, the group packed up from the campground and transferred gear into the canoes. One by one the canoes were launched and laughter soon filled the air. Heading out from the camp houses began to disappear one after the other, and slowly the river began to take hold.

Canoeing has its advantages. First you are able to pack more gear and a lot of those little extras that make trips more fun. Included in our trip were grills, which provided us with some of the cooking that wouldn’t be possible on your normal hiking stove.

Sleepy turtles sunned themselves on fallen trees and herons glided over the water, looking for the next meal. Paddling along the quiet was only interrupted by spurts of laughter, someone’s best rendition of their favorite oldie, and local fishermen as they hunted that “big one.” About an hour into the paddle we got a glimpse of the docks as we stopped for lunch on one. It was perfect timing with just enough light shinning through that it warmed our bellies after lunch. The fishing licenses bought by a couple of people were put to use as the fishing poles began their rhythmic pattern of up and down. Although they tried, I think that the herons had more luck in the end.

Back on the river, wooden signs easily mark the waterways, which are the only roads from dock to dock. With a map from the campground marking the location of the docks, we found it easy to know where to go. Markers also help to guide you in to the docks, which are located off the main river back between the trees.

Pulling up to our dock for the evening was a treat. Navigating around fallen trees and stumps canoes and kayaks are able to tie right onto the platforms. Platforms are only about 15 by 15 feet. But for a party of nine, this was plenty of room. Accommodations are made better by the construction of a privy in one of the platforms four corners. Visitors are given a portable port a john as they leave which goes inside the privy. Other than having to haul it back out, it was very convenient for our group.

Along with the company from Southern Adventures, local fishermen were more than eager to take time out to talk to me about what it was like growing up around the area. You could just picture the good ole boys as they were blessed enough to have this as their stomping grounds.

As part of the new wave of exploration, many explorers are turning away from the places were no one has been, but instead concentrate more on the people and the ways of life of the people who inhabit these places. I encourage everyone to jump on this new wave and see what adventure is in just your backyard.

Mosquitoes were not too much of a nuisance because of the cool temperatures. However, in the summer I can picture the swarms of bloodthirsty monsters looking for the next victim among the trees. After dinner some decided to try out night paddling. The moon shined down and lit the river to the point that lights were not needed. After the paddle the owls became more and more active, calling back and forth I wondered what they were saying.

Tents were not needed the second night out. Everyone in the group opted for the true feel of the outdoors and just slept in the sleeping bags. Looking up in the clear sky the heavens shined down on us. The sounds of the night were in full swing as the moon passed over. Slowly but surely, they sung their lullaby and I was asleep.

The next day was just as beautiful as the last. Fog from the cool morning lifted off the water and through the trees. Pancakes were made for breakfast, which filled everyone up and made great conversation. After packing our gear back into the canoes, we left the platform. The way back to the campground was a little more difficult because the current was against us part of the way. By the time we returned to the campground the group was ready to load up and head back to Southern.

Overall, the Roanoke didn’t disappoint me. It was everything that I had read about and hoped it would be. I definitely think that this adventure is worth the drive. If you do plan on going paddling, reservations need to be made with the campground and for the platforms. Remember to try to experience everything that is around you when you go out. Being nice to people that you meet opens up a vast world that you might have otherwise never known about. 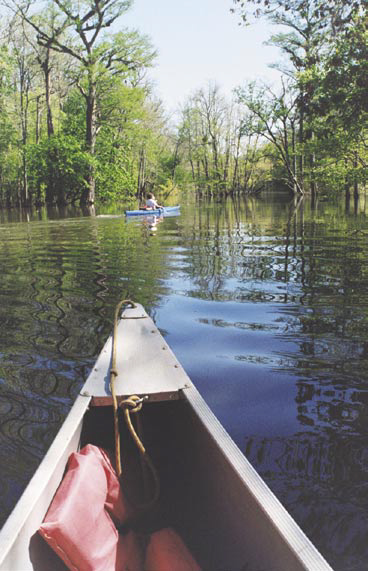 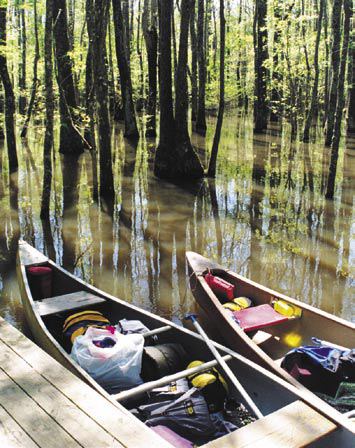 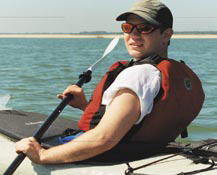 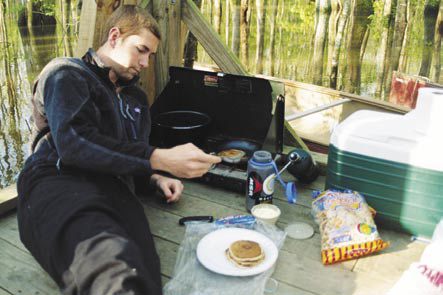 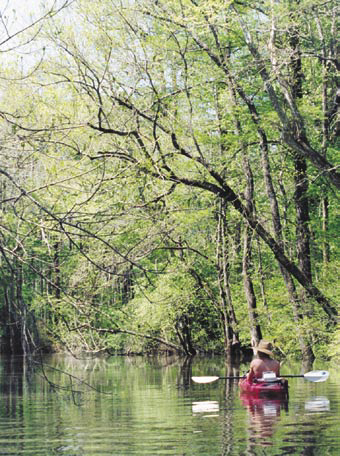