What is the Roanoke River’s relationship to the Underground Railroad?

Northeastern North Carolina, with its productive land and rivers, inevitably led to the formation of many large plantations. The institution of slavery supported these economic endeavors during pre-Civil War times. Where there was slavery, there were Freedom Seekers, and the Roanoke River became one of several regional river escape routes for the complex network in our country known as the Underground Railroad. Due to the inherent need for secrecy, and the resulting lack of documentation, estimates of how many people escaped vary widely. However, authorities estimate that there were 350,000 enslaved people in North Carolina when the Civil War ended.

https://historicsites.nc.gov/resources/north-carolina-civil-war/wars-end-and-reconstructionIn historian David Cecelski’s major study of slavery in the maritime South, THE WATERMAN’S SONG, Slavery and Freedom in Maritime North Carolina, he specifically addresses the Roanoke River as one of several eastern North Carolina’s inland waterways that were important passageways for antebellum (pre-civil war) Freedom Seekers. The Roanoke’s treacherous nature and the wild swamplands that surrounded it provided an ideal opportunity for those brave enough to be transported north to Virginia or south to the sea, often unseen and uncaptured. Slave watermen were a runaway slave’s best chance to reach the sea. In his Preface he states “…black watermen appeared at the core of abolitionist activity, slave insurrections, and other antislavery activism in North Carolina.” The extensive remote swamps and forests bordering the Roanoke provided safe havens for runaway slaves who needed short or long term refuge when escaping, as most had skills in wilderness survival. Frederick Law Olmsted who visited the Great Dismal Swamp in 1853, wrote that he heard of phantom colonies (known as “maroon” camps) of fugitive slaves whose children had been “born, lived, and died” in the swamp. For many of the enslaved, their only “freedom” came from reuniting with dispersed family members at other plantations, and the Roanoke River was one of the highways used to do so. 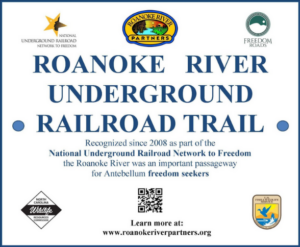 Roanoke River Underground Railroad Trail (RRUGRR Trail) signs have been erected at each of the NC Wildlife Resources Commission (NCWRC) boat ramp kiosks along the Roanoke River Partners Paddle Trail from Weldon to Plymouth. The signs have a scannable QRC code that links to the RRP website. There are three additional signs off the river: at the Rosenwald School in Hamilton, at Roanoke River National Wildlife Refuge (RRNWR) office in Windsor, and at the RRNWR Kuralt Trail parking lot off Hwy 17 north near Williamston.

The Roanoke River UGRR Trail signs are instrumental in showing the partnership that RRP formed with two cultural resources and two natural resources organizations in order to successfully create a self-guided tour, promote our region’s natural and cultural heritage, and cultivate community partnerships. 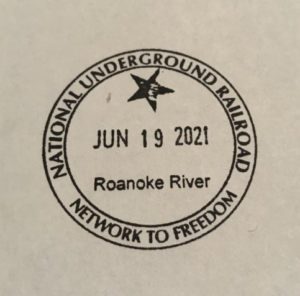 This is a developing process with more to come. From north to south, the six sites on our regional RRUGRR Trail with stamps available to the public now are:

(future) Roanoke River Partners, Inc. has a mobile stamp for use which will be available at The Rosenwald River Center once the center is opened. 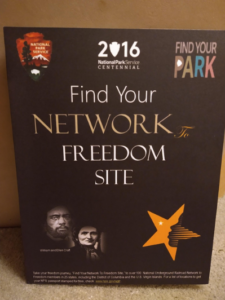 Like the familiar and popular National Parks and National Refuge passport stamps, these stamps are a way to encourage people to learn about the history of our country, whether they are traveling in reality or from an armchair (hence the virtual passport stamps). The National Park Service has a free passport booklet for stamps and has a website detailing all the UGRR sites across the country that one can visit. 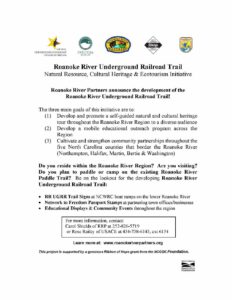 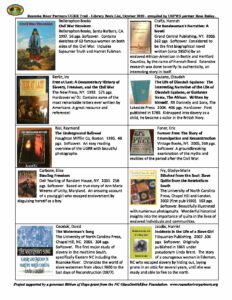 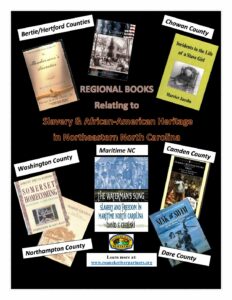 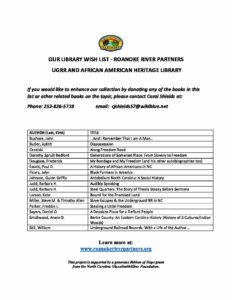 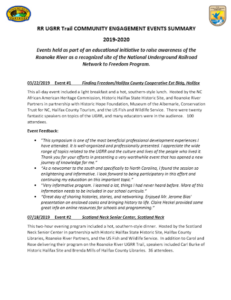 Events held as part of an educational initiative to raise awareness of the Roanoke River as a recognized site of the National Underground Railroad Network to Freedom Program.