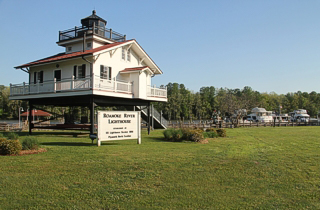 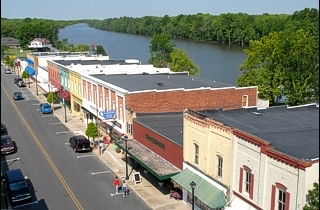 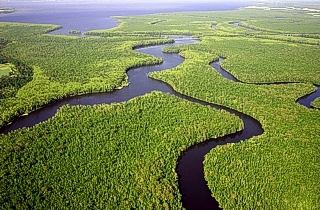 Plymouth is a paddler’s Paradise! As the mighty Roanoke rushes towards the Albemarle Sound, it forms a delta. A series of rivers and creeks converge across this broad basin with seemingly endless paddling opportunities. Plymouth is the gateway to this plethora of paddling with over 50 miles of shoreline within 5 miles of Plymouth!

The historic waterfront community of Plymouth is nestled on the banks of the riverbank, just 5 miles from where it empties into the Albemarle Sound. Once an important port, Plymouth now is a laid back community with a waterfront that includes shops, restaurants and three museums. Here you will find the Roanoke River Maritime Museum and Lighthouse on the west end of the waterfront, God’s Creation Wildlife Museum in the middle and the Port O’Plymouth Museum on the east end of the half-mile waterfront.

Behind the Port O’Plymouth Museum is a canoe/kayak launch situated along the boardwalk and finger piers. A good landmark to look for is the 62′ Civil War ironclad replica floating near the shore! This is a 3/8 scale working replica of the CSS Albemarle, which was the most successful ironclad of the war–twice defeating the Union Navy. Amazingly, it was constructed by a 19 year old contractor in a cornfield 90 miles up the Roanoke River near Scotland Neck.

The CSS Albemarle played a decisive role in the Battle of Plymouth, April 17-20, 1864, which was the last major Confederate victory of the war. But the victory was short-lived. Six months later the CSS Albemarle was destroyed in a daring nighttime commando raid that was retold in the History Channel’s documentary, “The Most Daring Mission of the Civil War”. You can see artifacts as this and other stories unfold inside the Port O’Plymouth Museum.

There are ample picnicking opportunities along the Plymouth waterfront, including three covered piers, as well as a covered picnic area next to the lighthouse. There are also picnic tables behind the Port O’Plymouth Museum where you can stretch your legs on the Rail Switch Nature Trail that parallels the river.

Be sure to include paddling amongst the ancient cypress trees that line the shore of the Albemarle Sound as part of your itinerary. Eagles and osprey nests abound in these cypress trees standing like sentinels dripping with Spanish moss. A good launch and take-out point can be found at Mackeys Marina in the community of Mackeys…Your adventure awaits in Plymouth–the inner soul of the Inner Banks, where history lives. It’s where traffic ends and adventure begins!  For additional information:  Visit Washington County and Town of Plymouth.