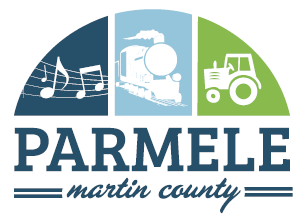 The Town of Parmele was established primarily as the junction point for two railroad systems which later became part of the Seaboard Coast Line system. After many proposals of where to place the junction point, it was decided to place it in the vicinity of what is now Parmele. The name Parmele was derived as a result of the Parmele-Eccleston Lumber Company, which located itself in the area around 1890 when the railroad branch line to Greenville was completed. Mr. E. A. Parmele of New York constructed the large steam mill in an area known for its trees. In 1892, another branch line extended to Washington from Parmele, making it a flourishing railroad junction city in its day. It was previously known as “Junction”. At one time during the 1890’s, Parmele had up to 11 passenger trains, as well as several freight trains, passing through daily.

The Town of Parmele was officially incorporated on February 14, 1893. The first mayor of the town was William Powell, who served from 1893 until 1906. The three initial commissioners were: David S. Powell, R. F. Gaines, and G. J. Cherry. The town also had a constable, which at times were referred to as a chief of police or policeman. This position also served as tax collector at most times. Mayor Lula Council was the first African American female mayor of Parmele and served from 2003 to 2015. The current mayor, Jerry M. McCrary, has served since 2015 as approximately the 15th mayor in succession.

The current town hall building was constructed in 1971 at a total cost of $2,785 by James Pitt, who was the first African-American man elected to a Martin County town’s governing board in modern times. Pitt later became the town’s mayor in January 1974 until 1981. The other half of the town hall building has housed the Parmele Post Office since it was built.

Parmele had its greatest population growth in 1940 by reaching a high of 417. At the time Parmele was incorporated in 1893, the population is believed to have been the same as current times, a little less than 300. The population of Parmele based on the 2010 Census was 278.

Besides the Parmele-Eccleston Lumber Company, another sawmill was established in the town shortly after incorporation. The North State Lumber Company was established in 1895. Both lumber mills ceased operations between 1900 and 1910. However, during the time both mills were open, they carried a strong mercantile business through one or more commissaries located in Parmele at the time. In 1896, there were at least 10 general mercantile stores in Parmele. In 1899, the town also had several churches, the Odd Fellows Lodge, Temperance Club, a school house, and Dr. L. C. Ricks, a town doctor. In the early 1900’s, there were also two hotels in Parmele: the Powell House and the Johnson House. These hotels primarily catered to railroad employees who required a lay over between their runs. A well-known lunchroom run by J.T. Stokes was also located near the railroad station for a number of years in the earlier part of the century. A devastating fire devastated the town on April 1, 1904 by destroying a large part of the business area along the railroad tracks. Parmele was also home to a bank for a number of years around the late 1910’s and early 1920’s. The J.C. Wynne Chevrolet Dealership was located in Parmele, as well, for a number of years before being relocated to nearby Bethel. Other businesses over the years included Lark Tillery Shoe Repair, Smith’s Service Station, Jesse Laughinghouse Grocery, Will Carson’s Filling Station, Johnnie Person’s Place, Lizzie Perkins Club, Tom Clay’s Club, and the continued beauty shop known as Maggie’s Homeside Hair Trends and Diane’s Beauty of Charm.

The first electricity lines in Martin County were said to have been installed in Parmele around the turn of the twentieth century. The early electricity current generated equipment in one of the lumber plants as well as some of the plant official’s homes. By a special election on March 5, 1935, the entire town was furnished electric current by the Virginia Electric & Power Company.

The first brick school building in Martin County was built in Parmele around 1914 called the Parmele Training School. Its original name was the Parmele Industrial Institute, a private institution which was founded in 1912 by beloved professor William Claudius Chance, who was born in Parmele. The school was built using both Phelps-Stokes and Rosenwald funds in 1914 by the county board of education who assumed supervision of the former school. For several years, the Parmele Training School was the only school providing high school-level education to African American youth in the upper part of Martin County. This school was consolidated with East End High School in Robersonville in 1955 due to a fire. The first school in Parmele in the early 1900’s was the Higgs Roanoke Seminary. Prior to 1912, W. C. Chance started the Higgs Industrial School. In 1910, Dr. Booker T. Washington visited Parmele.

Parmele is home to the Country music group “Parmalee”.  The band formed in Parmele in 2001 comprised of brothers Matt and Scott Thomas, their cousin Barry Knox, and their best friend Josh McSwain.  They rehearsed in a little cement block barn in Parmele off North Main Street before moving onto the biggest stages in Country music.  The band has many singles that have made it to the Top 40 on Billboard’s Country Airplay chart.

While the commercial life of Parmele may have changed over the years, the town still continues to thrive. In recent years, revitalization has been a focus of town officials. In July 2018, the town received a $1.1 Million grant for a new and improved sewer system. In 2019, the town is building a new maintenance facility. Parmele is truly, “The Small Town That Makes a Difference!”  For additional information: Visit Martin County and Town of Parmele.